MEANING OF RACE WAR READY:
​The RBPP are African centered Marxist, who are pro-Socialist and Anti-Capitalist. We are also Anti-Racist, Anti-Hate, Anti-Violence, Anti-Crime, Anti-Terrorist & Anti-Extremist.

However, there is a war waged against people of African descent, by racist, according to RBPP Chief, Dr. Alli Muhammad MD: "We are anti-hate and despise racism, you cannot fight racism with racism you fight it with power, revolution and the total overthrow of oppression, the oppress are of one community regardless of race, culture, creed, gender or background...".

People of African descent (Black people) do not have a war against any race or people, however, we are victims of a "RACE WAR" i.e. racial war & warfare aimed against us just because we are Black, it's a war where our complexion, hue, phenotype and skin color  of no volition of our own has been selected by the enemies of the people as our official uniform!

However, we stand for all oppressed people, we believe in ALL POWER TO THE PEOPLE; Black Power for Black People, Brown Power for Brown People, Red Power for Red People, Yellow Power for Yellow People, White Power for White People & Women Power for Women!

Being Race War ready is being trained, aware and prepared to lawfully eliminate any racist person who puts our lives in imminent threat or danger or who  is trying to exterminate Black people. 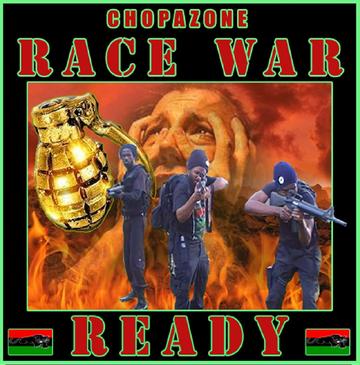 ​​WEBSITE IS STILL UNDER CONSTRUCTION. WE THANK YOU FOR YOUR PATIENCE & SUPPORT. BLACK POWER!